I’ve updated the previous post with some corrections and an explanatory note, after a reader pointed out that I’d mistakenly used the same word for both ชมพู่ 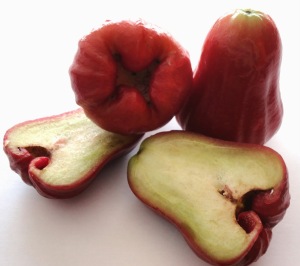 Though similar in some ways, they are two distinct words with different spellings (see that little mark above the last character?) and — I checked using google translate‘s audio feature — different pronunciations.

It’s actually a part of my language learning experience that I’ve been meaning to write about: mistakenly perceiving two different, distinct words as being the same; and then later on developing the ability to distinguish between them, and at that point recognizing the mistake that I’d been making all along.

Usually this happens because I perceive some similarity in pronunciation; sometimes there seems to be a similarity or linkage in meaning as well (something I touched on in Progressing Or Not?), which reinforces the belief that it’s the same word being used.

But I think there’s another factor involved: I think that, at least at some points, I’ve been unable to distinguish between two different words because I was actually unable to perceive the sound differences between them; and this was because there were sounds that I just couldn’t hear. (Well maybe on the purely physiological level, I did hear them; but on the level of awareness of language-sounds, they just didn’t register).

In this particular case, I can actually hear the difference between the two sounds in question (พู่ vs. พู), at least when doing a direct comparison (i.e., hearing them one after another). But I’d never consciously noticed the difference, and so far as I can tell I think I was perceiving/remembering both words as using the พู sound; I was probably pronouncing ชมพู่ as ชมพู — but I can’t be sure.

In any event, this is a case where I’ve benefited from someone correcting me because I can actually hear the difference that they’ve pointed out. (Well, like I said, I used google translate’s audio feature to check, and I’m hoping that the sound there is accurate; I’ve yet to check the two words from a live native speaker). If this hadn’t been pointed out to me, would I have gotten it on my own at some point? I have autocorrected in cases like this previously; but how long would it take?

I should also point out that, though I’m sure this kind of thing happens with all language learners, it might be more pronounced for me, given that I basically learned Thai as an illiterate and with very little explicit pointing out of the language’s sound system — what it is, how it compares to English, how it correlates with the Thai writing system, etc. Whereas a more “traditional” language learner might have seen the differences between the two words on the page when memorizing vocabulary, or even heard the differences early on if they were listening to a teacher (or audio recording) talk explicitly about the words’ differing pronunciations.

5 thoughts on “More Poo Than I Ever Knew: A Failure To Differentiate”